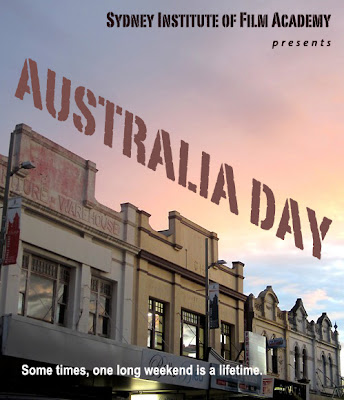 JOIN THE WRITING TEAM working with Billy Marshall Stoneking
on feature project, AUSTRALIA DAY, to be shot in 2014.

Posted by Unknown at Friday, September 13, 2013 No comments: Links to this post

WILD IN THE STREETS - Cult Movie

Posted by Unknown at Saturday, September 07, 2013 No comments: Links to this post 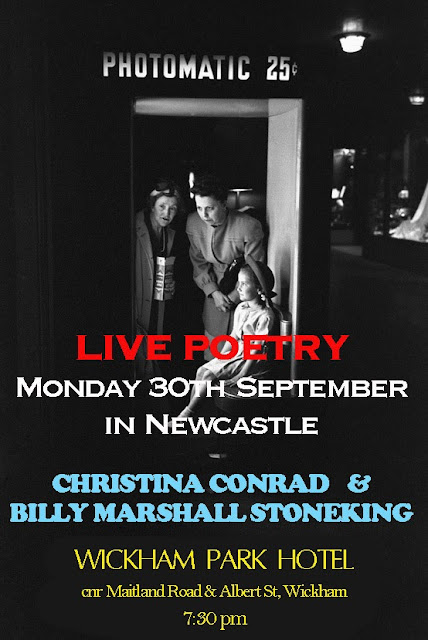 HEY HEY! Sydney-siders and Newcastle folk & everyone in between - don't miss this rare virtuoso performance by two of Australia's most dramatic and compelling performance poets. Billy Marshall Stoneking and Christina Conrad have performed together throughout Australia and North America to wild and disconcerting acclaim. They will be together again for this one-off memorable night. Bring your friends, bring your granny, make a group-night of it.  Special tandem reading will be preceded  by an open section featuring some of the best new and local poets.  Come as you are, leave changed.

Stoneking's poetry has been strongly influenced by the history and mythology of the Pintupi and Luritja people of Central Australia, and has been widely published in Australian literary journals such as Overland and Westerly. A major collection, Singing the Snake: Poems from the Western Desert 1979–1988, was published by Angus and Robertson in 1990. With Eric Beach and others, he was instrumental in the founding of the Poets Union of Australia. He was also deeply involved in the performance poetry scene, and featured in the performance poetry anthology Off the Record, edited by Pi O (Penguin, 1985).  He has since built a successful career as a playwright/scriptwriter, script  editor, stage, film and radio producer, and teacher & mentor. He's also written novels, Stringer (1988) and The Speed of Darkness (1989), and an autobiography, Taking America Out of the Boy (1993).

Conrad has been called New Zealand's greatest living artist. She is certainly its greatest eccentric. An obsessive "outsider" painter/sculptor, filmmaker, poet/writer, Conrad lived as a recluse for twenty years without electricity or running water, where she "kept her paintings in cupboards instead of food." Her work is written work and films are disarmingly original and not easily pigeon-holed, and the term "outsider" does not sit easily with her, suggesting someone who is untrained. Her recent feature documentary, Indecent Xposure, was the recipient of an Accolade Award in Los Angeles for Best Documentary. Her books have appeared in several notable collections of Australian and New Zealand poetry, including the Penguin Anthology of Contemporary New Zealand Verse.

"One must leave the ego at the door of the tomb, and create like a blind beggar who hears nothing and knows nothing," she explains. "In this way the painting has a chance to be born whole, without the insidious tampering that adulterates false creative acts."  - Conrad

Posted by Unknown at Thursday, September 05, 2013 No comments: Links to this post 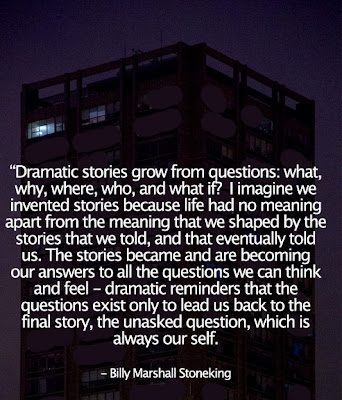 "One of the problems with so many would-be successful screenwriters is that they haven’t a clue about how to write a dramatic scene. They illustrate, they explain, they describe the art direction, but they hardly ever dramatize. If you can write one good scene, and then another good scene and then another, and another, you eventually wind up with a good screenplay, so long as you have got everything in the ‘right’ order and have also effectively used the "cuts" between the scenes to reveal character and story. As for the actual screenplay, most readers won’t initially be interested in the story it reveals, at least not to begin with. It takes a bit of reading to begin to care about the what-nows and what-ifs. What they can be interested in, however, is the ‘voice’, in the mind and heart of the storyteller (a character), and in the style of the telling - in short, the script’s attitude. Is it confident and assured, focused and inventive, or merely resuming character attributes and undramatic events?"
- BILLY MARSHALL STONEKING

FOR MORE ABOUT WRITING DRAMATIC SCENES, GO HERE
Posted by Unknown at Thursday, September 05, 2013 No comments: Links to this post 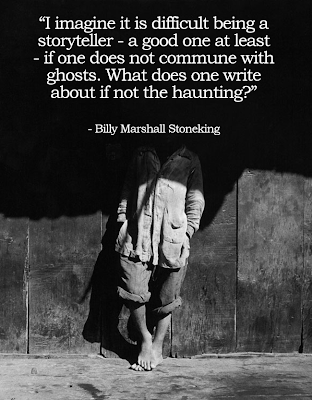 It would seem that I've been asking the question, "where's the drama?", long enough for it have to have finally crystallized into a rather counterproductive mantra that causes me some concern, especially when I hear that highly imaginative and daring scripts, with tons of emotion energy and subtext are being rubbished because they / quote / "lack drama". What I find most disturbing is the uncritical use and dogmatic application of terminologies associated with the notion of conflict/drama, and how easily a conceptual knowledge of the form supplants or displaces risk, intuition and insight. When ideas are reduced or clumsily debased into a language 'game' whose truth is codified in a specialized system of jargon, can formula and formulistic thinking be far behind? In the end, formula replaces form, and discovery and chance give way to stale predictability.

I wonder if I haven't (unwittingly) contributed to creating a headless and heartless monster formed from a curious crystallization of the jargon associated with dramatic storytelling. It is a misplaced concreteness. You CAN find and present compelling characters, involved in engrossing situations, that do not conform neatly to the paint-by-number recipes of screenwriting and film-making teachers that - despite their learning - have never been challenged by either the mystery or the suspense that can occur - despite the lack of drama - so long as the character is possessed of origins that intimately intersect with the storyteller's origins.

Posted by Unknown at Tuesday, September 03, 2013 No comments: Links to this post