12 THINGS EVERY SCREENWRITER SHOULD KNOW BUT USUALLY AVOIDS 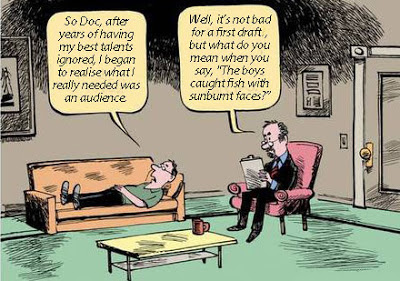 1. A good screenplay is the embodiment of a collaboration between your many selves and voices. The more in touch you are with those selves, the deeper you will be able to go.

2. Write out of a passionate need to show your audience something that is deeply felt and true to yourself.

3. Go where the risk is greatest - the compelling dramatic journey will always take you by way of the path leads right through the middle of your greatest fears - lay yourself constantly on the line. Be prepared to sacrifice everything.

4. Love the WALL (the block) that stops you in your tracks. Understand its source. It’s there because somewhere in what you’ve written you’ve lied or carelessly assumed more than you were entitled to, and the story - which has its own, invisible life - refuses to let you go any further. You can’t THINK your way around it. Don’t take refuge in formula - search out the “lie”. It’s there in the writing somewhere, waiting to be discovered.

6. Make sure there is something truly personal in each of your characters, even if it reveals you at your most vulnerable. You don’t have to admit to anything. Imagination will always be your defense.

7. Find your tribe. Initiate your collaborators. The script is a sacred tjuringa that opens a Dreamtime and inspires vision. Stick to your people, be faithful to them. Seek aesthetic and emotional compatibility with all your collaborators. Understand your director’s world view because it will colour his/her approach.

8. Push emotional extremes. Be daring. Don’t be a puritan. Lives are in the balance.

10. Make sure you include at least one impossible thing in your screenplay, and don’t let your director talk you out of it.

11. Character is the embodiment of obsession. Dramatic characters are driven - they are constantly fighting for something. There can be no rest until they’ve satisfied their needs. Leave out tea-drinking as much as possible.

12. Remember: screenwriting is a time art - it is more like music or poetry than the novel. 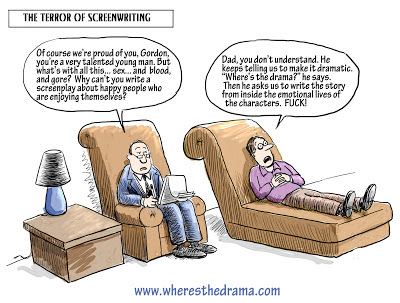 Posted by Unknown at Sunday, January 27, 2013 No comments: Links to this post

NEVER START A SCRIPT OR STORY QUESTION WITH THE WORD “HOW…?” 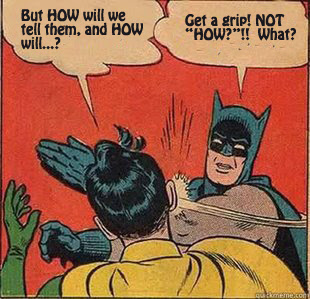 Any time you hear a screenwriter talking about HOW to write a scene, or HOW to construct a screenplay, or HOW to write effective dialogue, or HOW to develop dramatic characters, Beware! “HOW” is never the right word to start any question regarding drama, story, character or screenwriting, generally. The more useful questions, in terms of getting inside your characters, are WHAT and WHY, and some times WHO and WHERE and WHEN. “How” implies a recipe, a secret esoteric knowledge, as if there is some mystical alchemical process, the knowledge of which is only possessed by a priests class charged with guarding the formula, that sure-fire method for writing screen stories, for which the supplicants come begging. Formulas exist, to be sure, but HOW is no “open sesame” and can never address the more fundamental issues of surprise, freshness and originality - in other words, that rare quality we some times refer to as “the magic”. “How” is usura. When it is employed by the writer it already implies a repertoire of writer-centered choices.

One must FREE DRAMA from the chauvinism and tyranny of a writer-driven story. The writer is only one of the ‘characters’ necessary for finding the story. If the process is reduced to a puppet-puppeteer relationship it produces imbalances of power in the writer / character relationships - the usurpation of the potential potency of the contributions the other characters might make.

“HOW” is strategy. “WHAT”, “WHY”, “WHERE”, “WHO”, and “WHEN” are tactics. “HOW” involves goals and choices that in, film-making, are usually reserved for the director - when the writer involves him or herself in formulating a story’s goals, what needs to happen and what the happenings might possibly mean thematically, he/she is likely to ask “how” questions. But the meat and potatoes of any narrative strategy are the tactics, which are character-driven (writer, audience and tribe). Tactics refer specifically to action. Not how do they act? but why, for what purpose, and what is it that has triggered the action? Knowing how a character acts is not the same thing as understanding why they act.

For the writer that wants to work as a MEDIUM for character, it is not useful to ask of a character: “how did she make such a bad decision?” That is the sort of a question an observer might ask. Better to ask: “Why did she make this decision?” which is more like the question the character would ask of herself. To work as a medium for character, the writer must become more and more invisible. And while I could agree that the “HOW” question might get the writer THINKING - that is not usually an effective way of entering into intimate relationships with the characters. Quite simply, the the process demands that the writer disappears, as much as possible anyway, and that the characters in the story are allowed to say and do whatever they must in order to address the “WHAT” and “WHY” of what is happening to them and what they need to do in order to obtain their objective or reach their goal. “HOW?” is a spectator’s perspective.

For what it’s worth, I do an immense amount of work with writers (as a script editor) - and have done so for nearly 20 years - and I never ask the writers with whom I am working “HOW?” Not as a matter of form, but simply because it sidetracks the writer into a mind-set that separates writer from character. The writers I work with might from time to time ask me “How should I write this?” or similar, and I always respond: “‘How’ is the wrong question - what does the character want and why does the character want it and who or what is stopping the character from getting it, and why?” If you answer those questions, the “how” takes care of itself.

FOR MORE ABOUT READING AND ASSESSING YOUR SCREEN STORIES, GO TO WHERE’S THE DRAMA?

ALSO, USE THE DRAMA REPORTS TO DIAGNOSE SCRIPT AND STORY PROBLEMS.
Posted by Unknown at Saturday, January 26, 2013 No comments: Links to this post

THE SHAPES OF STORIES 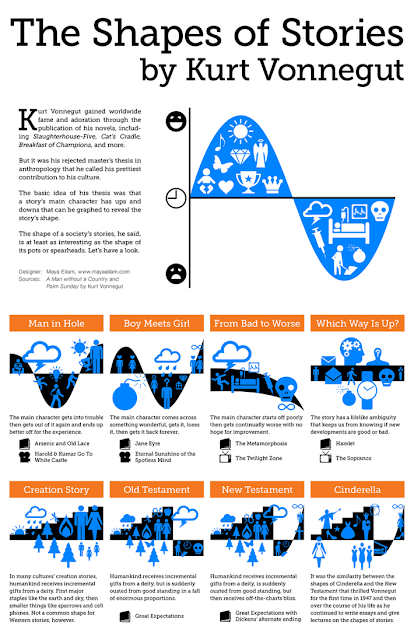 FOR LARGER VERSION, CLICK HERE
Posted by Unknown at Friday, January 18, 2013 No comments: Links to this post

THE BIG PRINT - Showing the Action from Billy Marshall Stoneking
Posted by Unknown at Thursday, January 17, 2013 No comments: Links to this post

In a dramatic monologue, the character that is speaking is wrestling with a problem that threatens - or has the potential to threaten - the speaker’s well-being or the well-being of someone or something that the speaker cares about, and there is at least one other character, present in the scene, to whom the monologue is addressed.

By definition, the dramatic monologue involves an intensification of feeling that is akin to its musical cousin, the operatic aria; A monologue’s appropriateness is determined by the circumstances in which the monologue character finds him/herself. The outpouring of feeling and its meaning resides in the appropriateness of the feeling as well as the degree of the intensity of expression given the circumstances and context in which it is uttered. Any outpouring of uninterrupted feeling must be clearly motivated and the emotional energy evidenced must seem apt and logical in terms of what has preceded it as well as what follows.

Fundamentally, a dramatic monologue should advance the story or narrative either by clarifying the speaker’s intentions or beliefs or by altering the relative emotional positions of the characters to one another and to the objectives that each is pursuing, or both.

An effective monologue will also reveal information about the speaker’s internal state of mind. 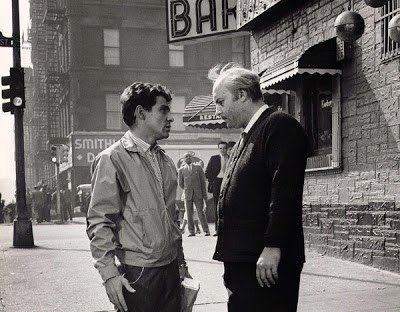 A dramatic monologue is often the most natural and emotionally logical response a character can have when faced with an extreme crisis or challenged by a “do-or-die” situation in which action can no longer suitably convey the immensity of what the character is grappling with.

In every effective monologue, the speaker is driven by an agenda in pursuit of a goal. Something is at stake, and what is said is to serve some purpose. The speech is not made merely to relate a story for the story’s sake, but to show or persuade in order that the speaker’s objective is not lost or confused. In other words, the speaker speaks in order to transform the circumstances under which he/she is operating and/or suffering, with the hope of enlisting the support, inducing the commitment, or changing the hearts and minds of those to whom he/she is speaking.

WATCH EXAMPLES OF DRAMATIC MONOLOGUES at WHERE’S THE DRAMA?
Posted by Unknown at Tuesday, January 08, 2013 No comments: Links to this post