DRAMA & THE FEAR OF FALLING 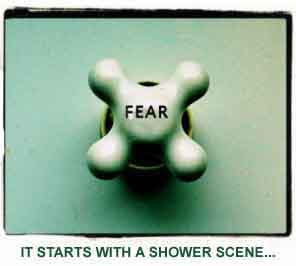 "The most important things are the hardest things to say. They are the things you get ashamed of, because words diminish them - words shrink things that seemed limitless when they were in your head to no more than living size when they're brought out. But it's more than that, isn't it? The most important things lie too close to wherever your secret heart is buried, like landmarks to a treasure your enemies would love to steal. And you may make revelations that cost you dearly only to have people look at you in a funny way, not understanding what you've said at all, or why you thought it was so important that you almost cried while you were saying it. That's the worst, I think. When the secret stays locked within not for want of a teller but for want of an understanding ear."  - Stephen King
“The world is made of stories, not atoms.” - Muriel Rukeyser

Screenwriting gurus both here and overseas have long "made their bacon" preaching the primacy of structure and formulistic principles. "Three-act structure", "inciting incidents", major & minor turning points" - are part of the lingua franca of those "in the know", as well as their eager disciples, and others desirous of mastering the difficult art of cinematic storytelling.

To be sure, the analysis of structure as presented by McKee and others has its value, but its usefulness is limited, and only really becomes apparent AFTER the storyteller has written a good part of the script. A slavish and single-minded adherence to structure in the hope that it will somehow allow one to conjure up a compelling and enduring film script is as likely as creating a masterpiece with a "paint-by-numbers" set. Though having said that I realise there will be some who will take it as a challenge, and if you happen to be one of them then all I can say is do your worst!

The preeminence of STORY and the conventional wisdom that “story is KING!" confuses ends and means. Story certainly matters in the end, but how do we - as prospective storytellers - actually find it? Where does it come from? And how might we give ourselves the best chance of intersecting with it? How does the dramatic, screen storyteller arrive at that state of being where story-as-intellectualisation gives way to a subtler and more profound recognition that stories are as fundamental to one’s life and well being as air and water.

Drama is principally a present-ation of the emotional and intellectual dimensions of the cause and effect of desire and its frustration. What a character wants (desires) and does (as a result of that desire – or frustration) produces consequences. The character either takes responsibility for the consequences or does not, but his reaction produces further consequences that impact on him and on the other characters and their world, thus creating more consequences. The law of cause and effect (karma) is the stomping ground of drama (including tragedy and comedy).

Likewise, when a story is told, it too has consequences. Perhaps it will cause people to feel something very deeply, or fill them with fear, or cause them to reflect upon some idea, or maybe simply put them to sleep. Just as a good dramatic character is responsible for his actions, so too are the best storytellers responsible for their stories. But here, “responsibility” does not so much signify obligation as the ability to respond.

Successful and satisfying dramatic stories are not created by chance or out of thin air. An essential component (without which all other components languish) is the personal engagement and commitment of the storytellers themselves to the story they are finding.
Metaphorically, it is not so much an affair of craft as an affair of "up-bringing" - or, rather, lifting the lid of one's unconscious, even if only a squeak.

What I am talking about is engagement – an engagement that is driven and inspired by openness to story. In other words, the journey to find the story becomes part of the storytellers’ own, personal journey towards discovering what that story means, emotionally, to the storyteller. It is, indeed, an act of self-discovery.

The attitudes that allow this discovery to happen and the collaborative synergy those attitudes produce take time to evolve, but once underway, the evolution is greatly assisted and encouraged when all members of the storytelling enterprise commit to a frank and respectful dialogue concerning their most intimate understanding of and connection with the story the team is seeking.

One could do worse than ask oneself: what is the story that possesses my being? What myth of self (-deception) is being played out in my life by the same characters, in countless guises, in a thousand various scenarios wherever I go?

The question implies the notion that there is an essential dramatic idea at the heart of each individual’s odyssey. But is this possible? Is there an underlying theme operating in every life? Is every individual possessed, either consciously or unconsciously, by his or her own singular and personal drama?

I believe the answer is, most assuredly, yes; and that in facing and acknowledging the essential characteristics of our own particular drama (or dramas) we can more honestly and fruitfully find, explore and understand how every story we seek to tell or contribute to (in some meaningful way) is in some way connected to us - to our hopes and to our anxieties.

If this is so, then the collaborative enterprise of finding the story that resonates with one's soul and with all of the souls that are seeking it - the greatest enemy is fear and the deceptions (the ignore-ances) that it encourages.

The playwright, Arthur Miller, has suggested that, essentially, drama is always about a fear of falling – the primal fear. Certainly, the first story in Western culture is a dramatisation of this fundamental fact of existence – the so-called Fall of Man. But what is the essence of the Fall? What brings it about, and what does it tell us about the nature of human and non-human reality? What does it tell us about HOW we should live our lives, and why and for what? Any story that prompts us to ask these sorts of questions is a story worthy of our attention.

The fall of Adam and Eve is a story founded on the idea of power and deception. Here, deception must be understood as being synonymous with evil. It might come as a surprise to some, but most of the Old Testament is composed of stories that explore the nature and consequences of deception, which is another way of saying the Old Testament provides a narrative investigation of the nature of good and evil, which includes its consequences.
In the Adam and Eve story, the principal deceiver, at least in the beginning, is the Serpent, who has promised Eve that by eating of the fruit of the tree of the knowledge of good and evil she can make herself like God. In her freedom, she chooses to eat, and afterwards, persuades her consort to do the same. They have been given the freedom to do anything they like, except eat the fruit of this tree, but freedom is meaningless unless one also has the power to choose NOT to be free. And herein lies the God-like irony, the incompatible addition (to freedom) that aborts through method (blame) and fear and guilt (anxiety) the very power Adam and Eve sought to achieve. Instead of becoming like God, they encourage God’s wrath.

When Adam is confronted by this anger and by the question (Why did you eat the fruit?) he blames Eve, and in so doing creates the first method (for escaping response-ability for one’s actions); likewise, when Eve is asked, she blames the Serpent, compounding the lie and avoiding the fact that it was her own desire to be God-like that led her to be tempted in the first place. 1

Deception informs every tragedy. The protagonist, himself, operates under a deception, a deception that he, himself, has helped to create and is invariably involved in perpetrating.
But deception also lies at the heart of all drama, including dramatic comedy. In comedy, the deception points out the absurdity of human life; in tragedy it underscores its pathos.
Every drama begins with a fall, or a fear of falling: falling out of a relationship, or out of a job, or out of society, or out of one’s life, or, existentially, out of meaning itself. It is this fear of falling that is expressed in the four anxieties that form the basis of dramatic action, as well as the protagonist’s impetus to re-establish some form of healing or rectitude. 2

Fear and falling, frustration and deception and the desire for truth and healing – this is the stuff out of which stories are made. The courage to confront one’s fears through acts of faith (in one’s characters and in oneself) is integral to the finding of the story. It is, indeed, such courage that makes the difference between a birth and an abortion. The courage to accompany one’s character on his/her journey is bought with the pain and anxiety one has endured and continues to endure in the act of grappling with the unsolved and seemingly unresolvable. One earns the experience, one buys the wisdom, one takes what one needs for oneself and one’s characters) and one pays for it. In this way, collaboratively – in one’s interactions with one’s collaborators (including one’s characters) one will be continually nourished and transformed by those inner stories without which there is no story at all.

1 Interestingly, in the image of Jesus hanging on the Cross we find the symbolic fulfilment of the Garden of Eden story. The Serpent in his tree is now transformed into Christ on the Cross, - the being who takes all the blame, and who, in so doing, exemplifies the saving grace of the Christ principle (Love).

Posted by Unknown at Tuesday, September 23, 2008 No comments: Links to this post