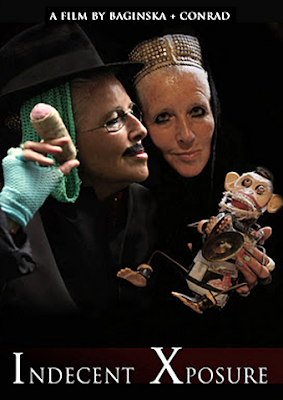 Journey through the eccentric and dramatic life of the mysterious and reclusive outsider artist, Christina Conrad. The film, in keeping with the artist herself, is an exception to most of the rules - a surprising and confronting mix of odd and original characters, tragic/comic monologues and bizarre improvisations counterpointed by fetishes, masks, icons, paintings, sculptures and photographs, punctuated by an original soundtrack by C.W. Stoneking and Steve Grant.

Accompany Conrad on an unforgettable odyssey of discovery as she exposes the characters behind the legend of her multifarious personality – the child, the barbarian, the earth mother, the misogynist and visionary. Conrad's life-long rebellion against "the art world", conventional wisdom and phony respectability, is waged with a freshness and humour that makes talent - though rare - seem so usual a thing.

For anyone that has ever struggled with the competing demands of domesticity and the tearing ruthlessness of the obsessed artist, here is a saga to inspire courage and confirm the insight that the creative life is always within reach so long as one is prepared to hoe the wilderness of one's own heart and mind. For Conrad it has never been a matter of choice. Indeed, at times, her life has been something of a sentence, she muses; made more difficult by the plight of being a woman.

Midst a seemingly endless juxtaposition of words, images and music, carried along by the on-going avalanche that is her life, Conrad strives to find the means to express and conduct the tumultuous energy that has torn through her since birth. In the process, she conjures a startling and unforgettable documentary that proves once again that the best nonfiction films are "best" not because they are the most informative, or most persuasive, or the most useful, but because they are the most creative, effective, and valuable human documents that can be made from the circumstances represented in them. Running time: 75 mins


Posted by Unknown at Wednesday, November 30, 2011 No comments: Links to this post